It’s the much-awaited replacement for Isuzu’s launch model, the MU-7. When that massive SUV was launched, what was clear was that it had presence, but up against the likes of the (now last-gen) Fortuner and Endeavour, it felt a bit behind the times. And now that there are new versions of the competition, this all-new model, the MU-X, couldn’t have come a minute sooner. It shares its platform with the Isuzu D-Max V-Cross, a car we really liked, and also the Chevrolet Trailblazer, but it gets its own unique engine and gearbox.

As such, it resembles both the cars it shares a platform with – the front end being very close to that of the V-Cross (complete with the massive ‘fanged’ chrome grille), and the glasshouse and rear quite similar to the Trailblazer. What’s new at the front is a more aggressive contrast-coloured bumper with LED daytime running lamps embedded in it. What’s refreshing is that it does without any black cladding on the sides and instead makes up for that with a set of really chunky wheel arches. The rear end may be similar in shape to the Chevrolet, even getting a similar blacked-out D-pillar, but Isuzu’s wraparound tail-lamps give it a distinct look. Also really attractive are the multi-spoke 17-inch alloy wheels; they may be a little smaller than what some competitors offer, but their design is really smart, and the tall, 65-profile tyres complement the tough look nicely. Overall, the MU-X has a strong SUV stance and a lot of presence.

As is befitting this sort of big, ladder-frame SUV, it’s a climb up into the cabin, and once there you’ll find a dashboard similar to the D-Max V-Cross, but with a number of new embellishments. For a start, there’s a nice texture to the plastics, there’s piano black frames for the vents and centre console, around the cool, circular AC control pod, and silver accents on the steering wheel with many more controls at your disposal. There’s even nice soft leather cushioning on the armrests and door pads. Fit and finish is pretty tight and the design is very neat, but you don’t get that same sense of richness you do in, say, a Fortuner or an Endeavour. 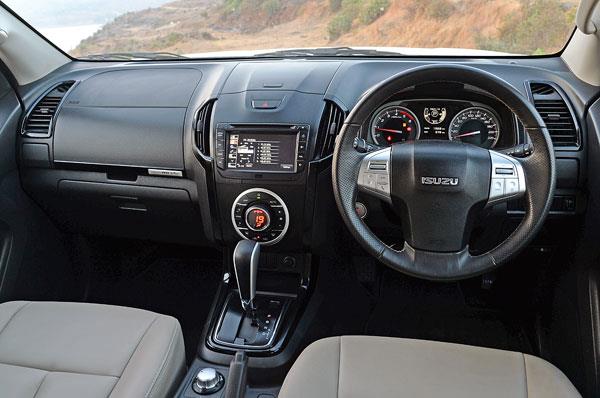 The equipment list is pretty good too. You get leather upholstery and a powered driver’s seat, keyless entry and go, there’s cruise control and there’s even a seven-inch touchscreen. The highlight though is a 10-inch screen that folds out of the roof so rear passengers can watch movies. Still, it doesn’t quite match up to more modern rivals; the touchscreen, for instance, is functional and easy to use, but doesn’t feature any form of smartphone integration.

What you’ll really love is the space, or even just the sense of space. For one, the front seats feel nice and comfortable even though they’re not heavily contoured. The driver’s seat is set very high (even short drivers won’t mind it in its lowest position), and that gives you a superb view out and a commanding position from the wheel. The middle row has huge amounts of legroom, thigh support is pretty good, and you can even recline the 60:40 split backrest. The third row is accessible with a single lever pull that folds and flips the middle row forward. Space here is pretty good too, but what’s better is that the seat itself is placed high enough and is well cushioned too. Boot volume isn’t tremendous but you could just about squeeze in a medium size suitcase with all three rows up.

The motor is a 3.0-litre four-cylinder turbo diesel that makes 177hp and 380Nm. The torque figure is telling because it’s considerably lower than most rivals, which generally are past the 400Nm mark, and a good reserve of torque is essential for big SUVs like this one. The gearbox is a five-speed automatic and can be had with either 4×2, or the 4×4 (selectable by a rotary knob) we have here.

It’s not the most refined engine, with lots of vibes and noise being felt once you extend it past 2,000rpm. The fan too is quite loud and can be heard in the cabin. If you punch the accelerator for an overtake or to pick up the pace after a speed breaker, you’ll get a massive bellow and not a lot of movement, and you just don’t know if the gearbox is going to shift up, down or not at all; it’s very inconsistent. If you keep the throttle at about one-third, it will make smooth and beautiful progress, the gearbox shifting away seamlessly.

Similarly, the ride quality. The long-travel suspension is set up very soft, so if you’re driving slowly and smoothly, you get this wonderful, pillow-like ride. But the moment you step the pace up, even past 60kph, it starts to move all over the place. Even the smallest of bumps registers in the cabin and the steering jolts around in your hands. Suffice to say it crashes pretty hard through large, sharp bumps. 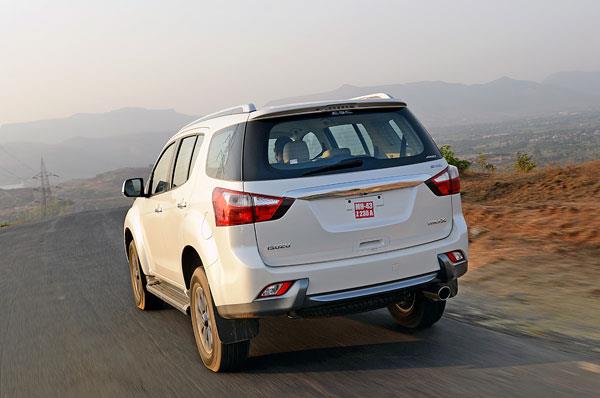 Like most ladder-frame SUVs, this isn’t one for corners, and the soft suspension results in a whole lot of roll. The steering, which is seriously heavy at low speeds, does retain some weight and feel at higher speeds, but there’s a distinct vagueness around the centre position. Also, with all the mass at work in the corners, the tyres quite easily squeal in protest. Again, provided you corner the car gently, the car will respond just fine.

So, it all depends on your driving style, whether it’s the engine, gearbox, ride or handling. This is not a car to be hustled and prefers being driven at a leisurely pace at all times. Overstep the limits and things start to go awry; stay within them and you’ll have a smooth and comfortable drive.

Should I buy one?

One thing to remember at the outset is, when the MU-7 was launched in India a few years ago, this MU-X was already on sale in markets like Thailand, and while it’s finally here now, globally it’s recently been given a facelift, and that’s not the one we’ve gotten. So it seems, once again, the Indian market has been denied the latest version of Isuzu’s flagship SUV.

Still, it’s a huge step up from the MU-7 and even the D-Max V-Cross in terms of luxury and creature comforts. Actually, how you view this car depends on what you compare it to. Yes, it’s a big step up from the V-Cross pickup, but then it costs nearly twice as much. At Rs 13 lakh, your expectations aren’t that high, but once you’re past the 20-lakh mark, there’s a standard to be met.

Speaking of which, the MU-X simply can’t compare to the new Fortuner or the Endeavour on most counts – performance, refinement, comfort, luxury, equipment and ride quality, but then you have to remember it costs Rs 5-6 lakh less than them. In fact, the entire MU-X range (Rs 23.99-25.99 lakh, ex-showroom, Delhi) is cheaper than the cheapest variants of the competition. Only the Chevy Trailblazer compares on price.

So, it falls a bit short of the gold standard set by the brand new Endeavour and Fortuner in this segment, but it is a whole lot more affordable. Think of it then as the SUV for those who are on somewhat of a budget but also don’t mind skipping a few fripperies. The MU-X has all the essentials, if not every luxury, while also being spacious and comfortable, and superb off road.

About the Author: admin